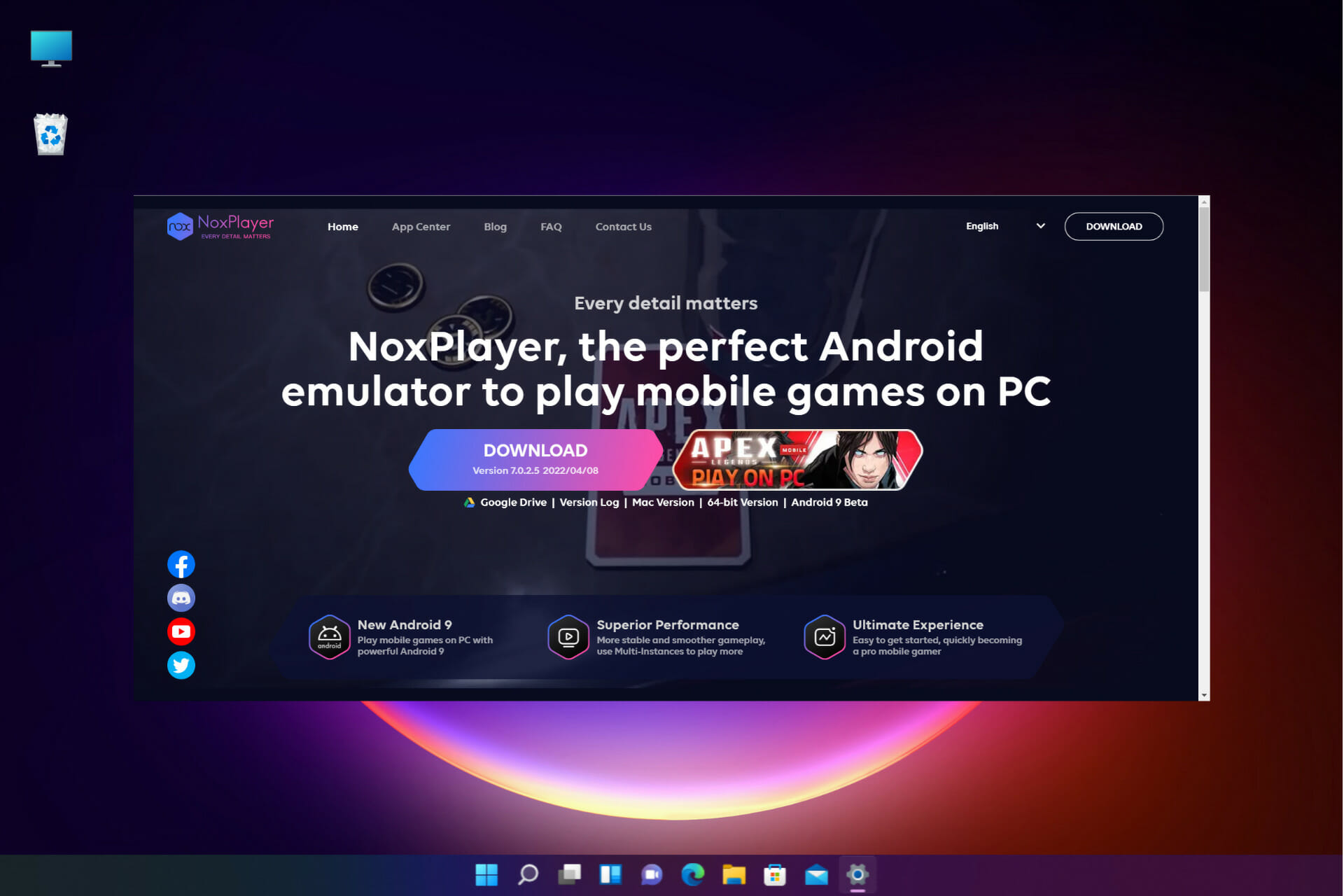 Hyper-V is Microsoft’s hardware virtualization product that lets you create and run a virtual machine that acts like a full PC system.

However, you should also know that VirtualBox and VMWare cannot work with Hyper-V enabled and that’s why if you want to run a virtual machine, the first step is to disable this feature.

This is usually a problem because you have to go into Control Panel or run a command line and change that, then restart your PC.

Well, that’s where the fun part begins because the new version of NoxPlayer is the first emulator in the market that supports Virtualbox technology and Hyper-V enabled at the same time.

How does NoxPlayer’s Hyper-V compatibility help me?

As you learned in our recent articles, Windows 11’s WSA and Google Play Games are based on Hyper-V technology.

Of course, you will be able to use them, but they will not be as feature rich as NoxPlayer and for any other emulator you will still have to modify the functionality and avoid Intel virtualization technology.

Finally, having Virtualbox and Hyper-V technology in the same product, NoxPlayer will work on any environment, whether your PC is Hyper-V ready or not.

What is the difference between NoxPlayer and the Hyper-V version of Bluestacks?

Bluestacks also created a new version but instead of upgrading the VirtualBox version, they released a fully Hyper-V based version.

This means you cannot run the emulator on Windows 10 Home and earlier operating systems that do not support Hyper-V.

Also, if you installed another version based on VirtualBox, you won’t be able to transfer your data to the new emulator, so say goodbye to your current status if it’s saved locally.

So, NoxPlayer made things much easier for everyone, including developers who also needed to switch between environments.

What are the best features of NoxPlayer?

You’ll be able to change the window size, access all the games easily and they’ll run smoothly, but that also depends on the amount of RAM on your machine, of course.

Especially in action games, there can be a lot of keys and controls, and managing them with your keyboard isn’t always easy.

With NoxPlayer, you can map all keys and mouse clicks in a flash, then save the configuration seamlessly.

In fact, you can even change the size of their screen representation and adjust their opacity to keep them from restricting your view.

Learn more about this topic

If you’re playing a game that requires a lot of repetitive tasks to advance, the macro recorder will help you get to the next level in no time.

Just press the Record button, the tool will automatically minimize to the top of the emulator window and record actions such as mouse clicks, slides and keyboard clicks.

After stopping recording, the script is automatically saved to your current list. After that, you can save several more loops and run them in any order you want.

As you can see, NoxPlayer brings heavy features that are impossible to ignore, and now that you have Virtualbox and Hyper-V under the same hood, it’s easier than ever to enjoy your games.

And yes, NoxPlayer can run Android 9 so you can play all new titles without a hitch.

Of course, you can also check our list including the best Android emulators and take your pick.

If you have already tested the new version of the Hyper-V NoxPlayer Android Emulator, do not hesitate to share your experience in the comments section below.

Still having problems? Fix them with this tool:

Restoro was uploaded by 0 readers this month.

Was this page helpful to you?