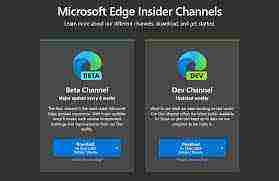 Microsoft has released a new developer version of Edge that includes Linux enhancements and other features.

Microsoft Edge Dev build 94.0.982.2 introduces a new option in the Immersive Reader to make text columns wider than they currently are, making everything easier to read.

Then it also comes with a settings page for accessibility options, as well as an entry in the Share pop-up in the pop-up menu, which means it’s now a bit easier to share content.

Many fixes and improvements
Like any other development version, this new version fixes several important crashes, including one caused when selecting tabs on macOS using the touch bar. Additionally, Microsoft reports an issue that causes the browser to crash when closing the application with a pop-up window open.

“Our media team has received a number of reports regarding a potential bug, so we wanted to update you on our findings. We have heard that a number of users who have the AdBlock (Plus) or Adblock for Youtube extensions installed are experiencing errors on YouTube videos. If you encounter this bug, you will likely encounter a black screen on the video player when attempting to upload a video to YouTube. We have found that this behavior occurs on all operating systems and all Microsoft Edge channels, ”the company says.

On the other hand, the problem that causes errors on YouTube is still there, and Microsoft claims that disabling certain extensions is, unfortunately, the only solution at the moment.

Keep in mind that this is still a development version, so other issues other than the one mentioned in the changelog may still exist in the browser.

Summary of the news:

Google Chrome to get music speed, design and control updates