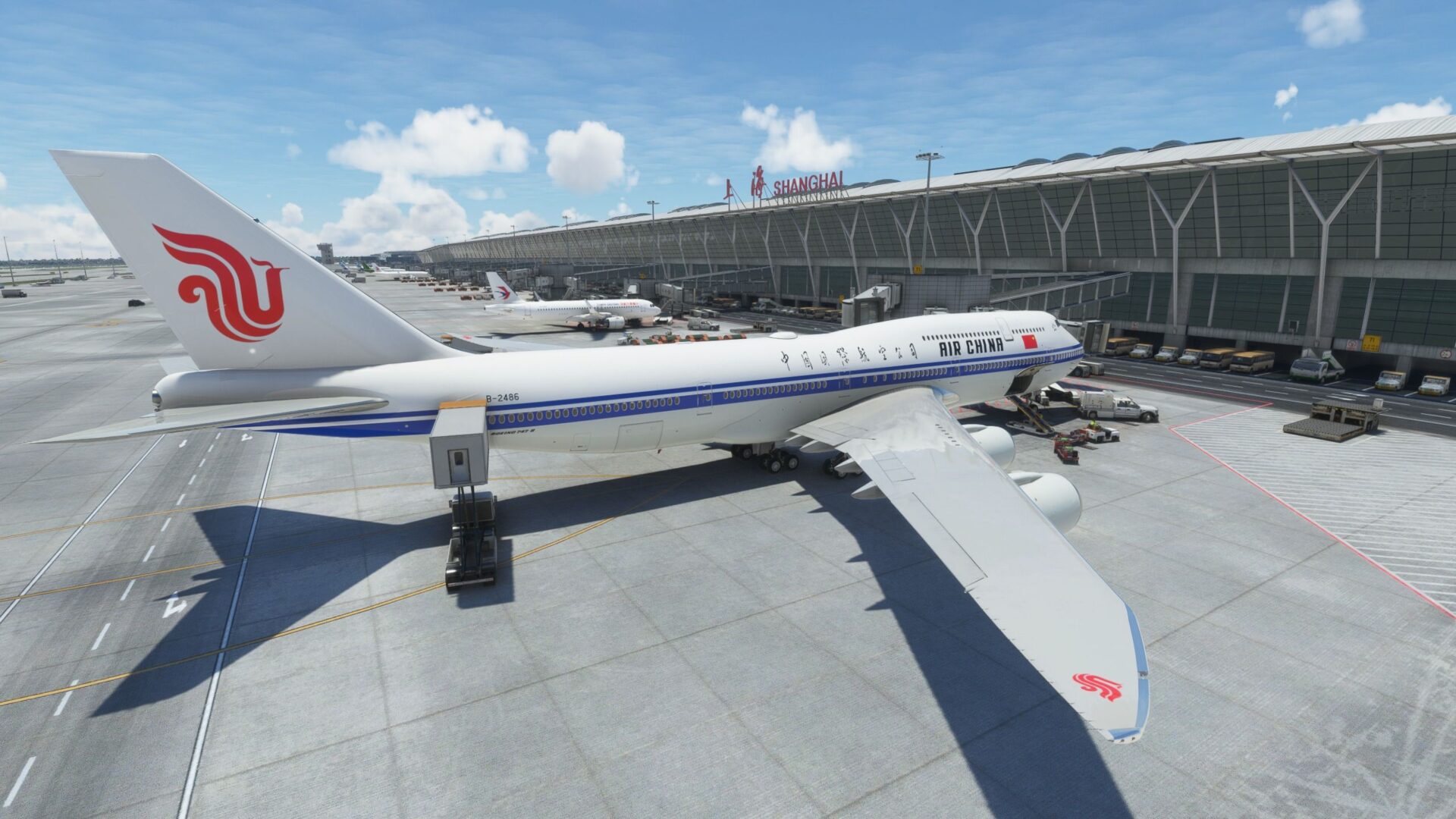 As one of the biggest and most important airports in China and the main international destination of the country, this add-on is definitely welcome for those who like to fly in Asia.

It’s available on SimMarket for around $ 28 plus applicable VAT and comes with its own installer.

If you want to see what the scenery looks like, you can watch an ILS approach and landing on runway 17R (using navigation data from Navigraph) in the first video below, and a full flyby in a variety of lighting and weather conditions in the second video.

It’s worth mentioning that the video above includes the Shanghai city add-on from SamScene3D, which is pretty much the perfect complement for this airport, as there are several approaches that will bring you directly to the city itself, especially in from the mainland.

Published approaches, SIDs and STARs are all present, but ILS locators are slightly offset to the side. This is an issue that was inherited directly from the original Microsoft Flight Simulator data, and something I noticed is quite common at airports located in China. It’s usually fixed by the developers pretty quickly and hopefully that will happen to this add-on as well. That being said, if you have Navigraph this issue will not affect you.

On the flip side, visual approaches can take advantage of properly calibrated PAPI lights, while taxiways are all properly labeled, meaning that ATC by default will provide helpful guidance for navigating this complex airport and that AI planes will have no problem negotiating it as well.

I noticed only one small issue where runway 16R / 34L meets taxiway Romeo 4. An underlying issue will cause AI planes to leave the runway after landing to cut the grass. Speaking of live AI traffic, you will find a tonne from that of Shanghai, so expect a very busy airport.

It should be mentioned that Microsoft Flight Simulator only recognizes four runways. The new runway 15/33 is not functionally implemented (but is fully modeled visually). Apparently it’s used exclusively as a test track for the nearby COMAC factory, which is nicely modeled to add more flavor to the landscape.

All ground services are available and functional, including the tankers so often overlooked by set designers.

The ortho-imagery on which the aircraft is based is sufficiently detailed and serves as the basis for beautifully textured runways, taxiways and aprons. The developer did a masterful job depicting realistic concrete and tar surfaces. All the markings are faithful to the maps and to all the photographic and video sources that I could find. They are also perfect in terms of aging: neither too washed out nor too cartoonish.

A relatively minor issue is that the rubber markings on the braking areas should only be present on runways 16L / 34R and 17R / 35L, as they are typically used for approaches, while the other runways are used for departures. , so they don’t get nearly as much blackened by the tires of the braking planes.

Another imperfection, the aprons used by the COMAC factory have very visible contours for the C919 and ARJ21 parked. While the airport doesn’t feature any static planes (and that’s a perfectly valid choice for Microsoft Flight Simulator landscapes, which many will agree with), some perhaps would have been a welcome addition to the plant, covering the contours.

There are occasional flicker-affected textures where the developer has sculpted very nicely modeled freeways and underground roads into the terrain, but a patch has already fixed most of them quickly, and the remaining issues are only visible. only from certain angles.

The modeling and texturing of the terminals is a masterpiece, highlighting complete interiors and plenty of detail both airside and townside. This is further enhanced by some of the best custom gateways I’ve seen on the market and the masterful use of weathering and physical rendering.

The rest of the airport buildings, including towers, cargo areas, hotels, the COMAC factory, and many surrounding offices and facilities, also feature high-quality craftsmanship.

You also get a fully modeled highway and the monorail that goes to the airport is bustling.

Looking at smaller but no less important details, the signage (both 2D and 3D) is crisp and precise, and there is a lot of clutter and vehicles decorating the aprons, with the appropriate liveries owned by local operators.

All these elements make Shanghai Pudong a real sight to behold, worthy of the importance of the real hub.

The airport reacts well to bad weather, with its textures embellished with beautiful reflections in the rain. Only the windows do come off a bit, but that seems to be an engine limitation and the developer actually seems to have made a conscious effort to limit the problem. Snow cover isn’t perfect (but hardly ever is), but at least it’s above average.

Night lighting looks great, making the airport look very natural after dark. Even the interiors, which often tend to be this area’s weak spot at many airports, look very pretty from the outside when lit, thanks to appropriately tinted glasses.

Speaking of performance, the airport is absolutely huge and rich in detail, so expect a significant impact on material resources. However, it is far from crippling. On my PC (RTX 3070, Ryzen 9 3900x, 32GB RAM) with 1440p resolution and Ultra detail settings I am losing around 10 FPS compared to the default landscape.

That’s certainly not bad, considering what you’ll get in Microsoft Flight Simulator out of the box looks terrible, while this add-on is fantastic and adds an absolutely huge amount of missing detail. You can see for yourself in the comparison above.

Ultimately, a few small issues can’t really dampen the quality of Shanghai Pudong Airport by WF Scenery Studio. It does justice to the real airport and is certainly one of the airports available for the simulation with the highest craftsmanship.

The fact that this kind of top-notch quality standard is paired with such a massive scale further increases the value of the add-on.