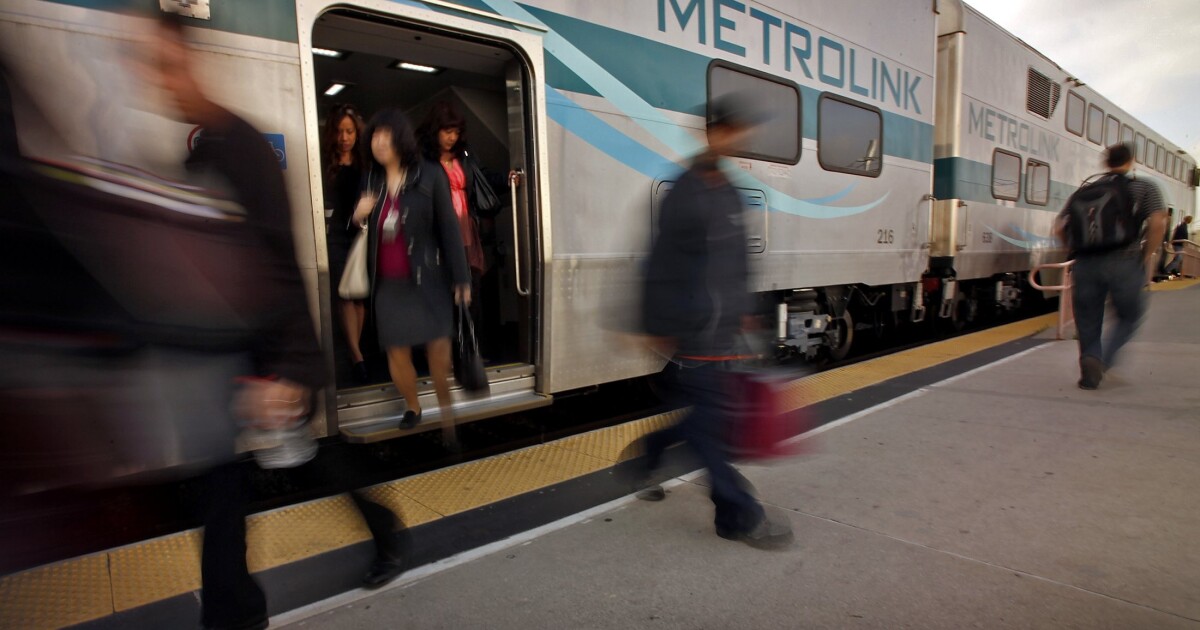 If you use Metrolink to get around Southern California, your trip may have become a little safer during an earthquake.

The rail transit system announced this week that it is equipping some of its trains with a new earthquake warning system that can automatically slow or stop travel during a tremor.

The first trains to receive the new technology are on Metrolink’s 91/Perris Valley line between Riverside and Perris. This route was chosen because of its relatively low traffic as well as its proximity to several major fault lines, officials said.

Metrolink plans to roll out the system on all trains along its 538-mile rail system, which crosses six counties.

“It’s an extra thing in their toolbox that helps Metrolink protect its passengers and its train crew,” said Robert-Michael de Groot, spokesman for the US Geological Survey’s ShakeAlert system.

A previous system implemented in September sent notifications based on ShakeAlert data to Metrolink engineers operating a train during an earthquake.

Under the new system, if an earthquake should shake hard enough, the automated technology will kick in and slow the train or bring it to a complete stop.

Before last year, Metrolink relied on a phone game, in which dispatchers received an alert about the magnitude and location of an earthquake, then manually relayed it to train engineers, Luis Carrasquero said. , acting deputy director of Metrolink.

This system was used after the 7.1 magnitude earthquake centered in Ridgecrest that rocked Southern California on the weekend of July 4, 2019. Metrolink close his service that day as he inspected the line for damage.

“With earthquake warning, time is the basic currency,” de Groot said. “Machines can act much faster than people.”

Automated braking systems are not new to Metrolink. They were added to trains after a 2008 collision in Chatsworth in which 25 people were killed when a commuter train engineer became distracted and hit a Union Pacific freight head-on.

And a machine will only take control if the shaking is strong enough.

Using what is called the Modified Mercalli Intensity Scale, the system will send notifications to training engineers when the shaking during an earthquake is weak or light, similar to that of a passing truck and observable by someone inside the train, Carrasquero said.

When the shaking reaches the level of being woken up at night, or when windows and doors begin to vibrate, the system will automatically reduce the speed of the train.

If the shaking is strong enough to break windows, empty dishes from cupboards and knock over unstable objects, the system stops the train.

The USGS will also send Metrolink a report indicating which parts of the railroad, bridge, overpass or tunnel may be damaged so that crews can inspect those areas before resuming travel, Carrasquero said. The automated system will avoid stopping a train under one of these compromised structures.

De Groot said Metrolink’s new system was also important for a region’s resilience and recovery after a severe earthquake.

“You need trains and highways to get people and first responders where they need to go,” de Groot said. “And one of the main routes to recovery is to open your transmission lines so you can supply people.”

After the 1994 Northridge earthquake damaged major highways, including the 10, 5 and Route 14, transit officials added more trains and buses, including Metrolink routes to and from Santa Clarita, to alleviate transportation needs.

Although the earthquake warning system will eventually arrive on all railroads owned by Metrolink, its trains also run on tracks owned by other companies. Metrolink owns about 60% of its rail lines, while the remaining 40% is owned by Union Pacific, BNSF Railway, and the North County Transit District.

If, during an earthquake, a Metrolink train is running on another company’s tracks, the system will send warnings and notifications to train engineers, but it will not slow or stop the train.

Since the initial warning system was added to trains in Perris Valley last year, no earthquake large enough to activate it has struck, Carrasquero said.

After several months of testing the system on its Perris Valley trains, Metrolink will begin adding it to nearby lines.

As of 2020, Bay Area Rapid Transit in Northern California has been using similar ShakeAlert automated technology that stops or slows trains.

The Los Angeles County Metropolitan Transportation Authority also uses ShakeAlert warnings to notify its staff, railroad operators and maintenance crews of earthquakes, but it does not have an automated braking system.

Like many public transit systems, Metrolink ridership has plummeted since the onset of the COVID-19 pandemic in the spring of 2020. Previously, the average weekday daily ridership was 45,000, said Karen Bakar, gatekeeper. -word of Metrolink. Last month, average daily ridership was only around 15,000.