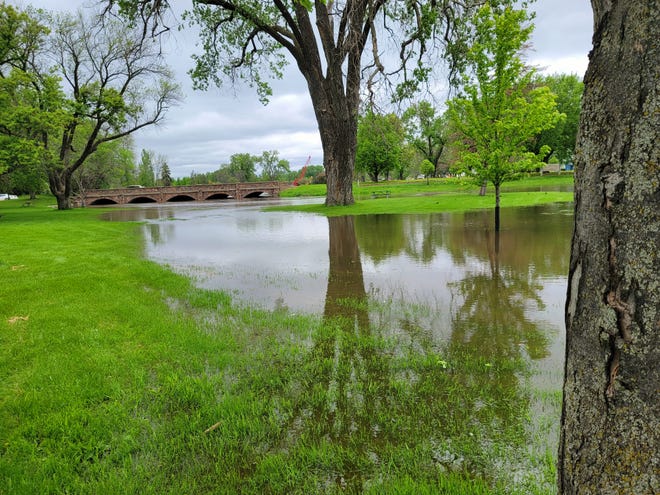 It is the spring of bad weather and heavy rains.

Weekend storms, particularly on Monday, caused minor flooding across the region. And four tornadoes were confirmed on Memorial Day, according to the National Weather Service.

There was damage, but no injuries, according to storm reports.

Amy Parkin, chief forecaster with the NWS office in Aberdeen, said the storms were strongest when they reached Minnesota, although there were some reports of minor flooding and tree damage in the area. Watertown area.

The strongest tornado had winds of 140 mph

A tornado in Deuel County was the strongest, receiving a Fujita scale rating of EF-3. The highest wind gust in this tornado was 140 mph, according to an NWS storm survey report.

According to the report, three transmission towers were damaged and a farmhouse also lost several outbuildings and suffered roof and window damage.

An EF-1 tornado was reported 4 miles northwest of Clear Lake in Deuel County with peak winds of 115 mph. This tornado damaged a barn and a grove of crippled trees, according to storm reports.

After:Up to 7 inches of rain leaves some Brown Counties, township roads under water

A third tornado was reported 2 miles northwest of Clear Lake in Deuel County. Its rating was EF-1, with peak winds of 100 mph. A farm suffered damage, including a destroyed barn and machinery shed, and windows blown out of the house. Several trees were also uprooted, according to the storm survey report.

A fourth tornado 4 miles southwest of Labolt in Grant County was an EF-1 with peak winds of 97 mph. A farmhouse had a roof ripped off a barn. Roof panels were also blown off the house, and there were shattered windows, a dented grain silo and uprooted trees. A second home sustained damage to half of its roof, with that portion blown off for about half a mile, according to the storm survey report.

More humidity in the region

Watertown received 2.16 inches of rain between Saturday and Monday, Parkin said. But that doesn’t seem like much compared to the 7.3 inches reported over the weekend about 7 miles northeast of Aberdeen.

Aberdeen had 3.45 inches of rain on Monday alone and 4.09 inches over the bank holiday weekend.

Despite the rainfall received in and around Watertown, there are currently few severe flooding concerns for Codington County, according to Emergency Manager Andrew Delgado.

“We’re having minor flooding right now, but it will be drier the rest of the week,” Delgado said Tuesday. “The Big Sioux watershed will experience the greatest impacts from flooding, but water levels are expected to stabilize soon.”

Low-lying areas of Stokes-Thomas Lake City Park along Kampeska Lake, including some campsites, were under water on Tuesday. And roads in Brown County and the township were also struggling with floodwaters on Tuesday.

A flood warning has been issued by the NWS for the Broadway Avenue area of ​​Watertown as the river is in a minor flood phase.

The Bath area just east of Aberdeen received about 6 inches of rain, Parkin said. And there have been reports of 1-inch hail near Norden Lake in Hamlin County.

The James River at Columbia in Brown County, which has been flooded for several weeks, rose about 5 inches over the weekend, Parkin said, pushing it to 18.46 feet. Even before last weekend, the river was a major stage of flooding.

For farmers in this region, that means more water on their land during a wet spring that has already made it difficult to plant crops in much of northeastern South Dakota.

There’s definitely been more rain than normal this spring, Parkin said. There has been 10.82 inches of rain in Aberdeen so far, compared to 4.2 inches a year ago and 3.6 inches in 2020.

Total precipitation for the year is up across the region. Year-to-date totals followed by normal totals through the end of May for various communities follow.

The NWS forecast calls for dry sunny weather in the Aberdeen area before a 40% chance of rain on Friday evening and more rain possible through the weekend.

For Watertown, the scenario is the same. Sunshine and mild weather are forecast until Friday evening. Next, the NWS is calling for a 60% chance of rain with more possibility on Saturday.